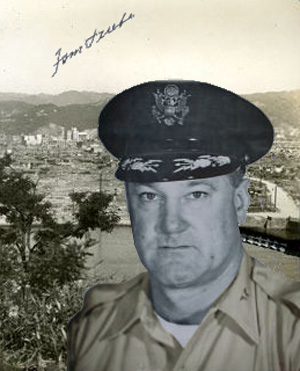 I decided to answer your letter received yesterday (65) instead of going to the movie tonight.

I still haven't received that other package you sent and am beginning to wonder if I ever will. They sure do take a long time to get here.

I guess that by now you have heard or read about this new bomb the U.S. has. Thats all a fellow can hear around here, either on the radio or the guys around here talking about it. Are the people in the states talking about it much? Baby if all they say about it is true, I don't think that we will have long to wait before these little....bastards give up.

At least I don't think that we should even have to go into combat again. If they do give up I may have a chance to get out of the service when my enlistment is up. At least I hope so! Wouldn't that be wonderful? I am just thinking out loud so don't you go getting your hopes up.

That bomb sounds like something out of a "Buck Rogers" comic strip. Its really hard to beleive. The morale around here has gone up a hundred percent since that started making those announcements about it. If all that is true and the U.S. doesn't let any other nation get hold of the secret we shouldn't have to worry about any more wars.

Yours as ever & forever;
Lucky