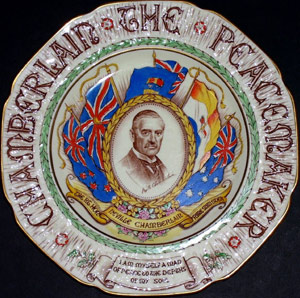 GERMANY, the United Kingdom, France and Italy, taking into consideration the agreement, which has been already reached in principle for the cession to Germany of the Sudeten German territory, have agreed on the following terms and conditions governing the said cession and the measures consequent thereon, and by this agreement they each hold themselves responsible for the steps necessary to secure its fulfilment:

(1) The evacuation will begin on 1st October.

(2) The United Kingdom, France and Italy agree that the evacuation of the territory shall be completed by the 10th October, without any existing installations having been destroyed, and that the Czechoslovak Government will be held responsible for carrying out the evacuation without damage to the said installations.

(3) The conditions governing the evacuation will be laid down in detail by an international commission composed of representatives of Germany, the United Kingdom, France, Italy and Czechoslovakia.

(6) The final determination of the frontiers will be carried out by the international commission. The commission will also be entitled to recommend to the four Powers, Germany, the United Kingdom, France and Italy, in certain exceptional cases, minor modifications in the strictly ethnographical determination of the zones which are to be transferred without plebiscite.

(7) There will be a right of option into and out of the transferred territories, the option to be exercised within six months from the date of this agreement. A German-Czechoslovak commission shall determine the details of the option, consider ways of facilitating the transfer of population and settle questions of principle arising out of the said transfer.

Annex to the Agreement
His Majesty's Government in the United Kingdom and the French Government have entered into the above agreement on the basis that they stand by the offer, contained in paragraph 6 of the Anglo-French proposals of September 19th, relating to an international guarantee of the new boundaries of the Czechoslovak State against unprovoked aggression. When the question of the Polish and Hungarian minorities in Czechoslovakia has been settled, Germany and Italy for their part will give a guarantee to Czechoslovakia.
Munich, September 29, 1938

Additional Declaration
The four Heads of Government here present agree that the international commission, provided for in the agreement signed by them today, shall consist of the State Secretary in the German Foreign Office, the British, French, and Italian Ambassadors accredited in Berlin, and a representative to be nominated by the Government of Czechoslovakia.
Munich, September 29, 1938

Supplementary Declaration
All questions which may arise out of the transfer of the territory shall be considered as coming within the terms of reference to the international commission.
Munich, September 29, 1938