The Battle Song of Liberty 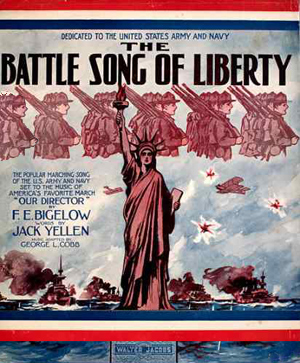 Title Page of "The Battle Song of Liberty" forces in France. Mr. Jacobs received recently at his Boston office a letter from Chas. B. Tyler, band leader, Twenty-eighth United States Infantry, with the American Expeditionary forces in Paris, France, inclosing a copy of a memorandum placed upon the regimental bulletin board. The memorandum included the words of the verse and chorus of "The Battle Song of Liberty," as follows:

It’s the roar and rattle of Freedom’s battle
That’s calling us over the sea,
Where a mighty foe has challenged us, boys
It’s up to you and to me;
So get Old Glory, we’ll make ’em sorry
That they ever dreamed of this fight.
We’re on our way with a Hip! Hooray!
Just to do what we know to be right.


So here’s to Uncle Sammy faithful and true;
Here’s to our banner of red, white and blue;
And here’s to all good fellows on land and sea
Singing the Battle Song of Liberty.


So here’s to Uncle Sammy faithful and true;
Here’s to our banner of red, white and blue;
And here’s to all good fellows on land and sea
Singing the Battle Song of Liberty.

The verses were followed by the order: "The commanding officer directs that the above'copy be furnished to all organizations of the regiment, and that a copy be posted on company bulletin boards, in order that every man can memorize the 'Battle Song of Liberty.' (Signed) Hugh L. Parker, Captain Twenty-eighth Infantry, Admtant."


Contest for New Patriotic Song Fails to Disclose a Winner The contest for a new national anthem to succeed "The Star Spangled Banner," which was held by the New York Globe and which closed June IS, after several delays, has been decided. The judges, Dr. Horatio Parker, of Yale; John Philip and Dr. John Erskine, of Columbia, have unanimously agreed that nothing submitted may be seriously considered as a successor to "The Star Spangled Banner" or "America."