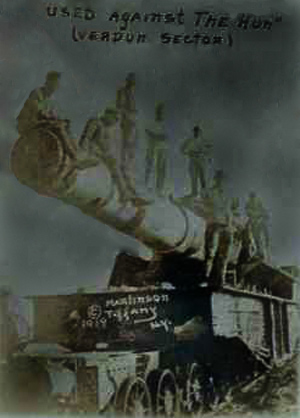 As my leave is almost over I thought I'd drop you a line and send you some pictures at the same time, I understand the division is moving I don't know which way.

In all the report that we read you would never know that we were over here, there was a list of the divisions that were on the line when the Armistice went thru and our division was in alright here in that says we were in and in one of the hotest hotbeds on the whole front in front of Verdun, the very word Verdun sends a shudder thru me and I do not wonder that the Frenchmen in the defense of Verdun in nineteen fourteen had to partially under the influence of liquer in order that they remain and fight.

I never saw or heard so many guns going continuously from day to day without cessation and A Co our regiment had a job to do on a road where shells where dropping all the time making new holes to be filled by us and do you know we only had two men slightly wounded in the whole affair, then we moved to another road a short distance away sleeping nights on a hillside and still the guns boomed on both sides, they had beaucoup so did we and it all ceased and we knew that the hour and minute had at last arrived such celebration the doughboys and everybody went simply foolish, hit especially the infantry , rockets were going at all times of the night which were formerly signals for barrage, gas and so forth, fires were lighted every-where.

Our infantry went into the lines February the fourth and we were in continuously with the exception of most of the month of August, until the Armistace was signed