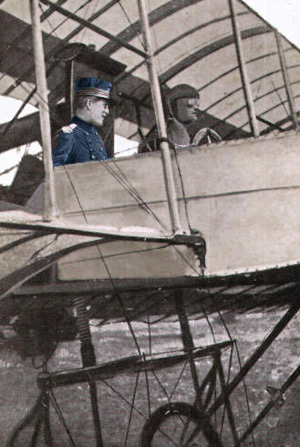 One was shot at by one of our Ballonabwehrkanone and he disappeared in the direction of Menin. The other flew away over Lendelede in a north-easterly direction.

At that moment we saw a southbound train approaching on the railway line Ingelmunster-Kortrijk. Suddenly the plane went into a steep dive of about 60 degrees from a height of about 2,000 metres to about 40 metres from the ground. He flew over the train in a loop and as he rose up into the sky again with his wings almost vertical, he threw a bomb at the train. Fortunately it missed the target and there was no damage. The bomb landed about 40 metres east of the track and blew a crater about one metre deep and two metres in diameter. The driver of the locomotive brought the train to a stop.

As the plane had swooped down over the train the Bahnschutzwache troops had fired on it following my order to open fire. We shot at him from a distance of only 100 metres as he flew past.

After he had thrown his bomb at the train he tried to escape, switching his engine on again and climbing to about 700 metres through the shots fired by our troops. But suddenly the plane began to sway about in the sky, the engine fell silent, and the pilot began to glide the plane down in the direction of Hulste.

I immediately got on on my bicycle and set off to chase the plane, accompanied by some of the men from my unit on foot.

As soon as the plane landed the pilot set it on fire and ran to a farmhouse in Hulst.

I was the first to arrive at the scene of the burning plane. Several others soon joined me and my men, including some dragoons from a Württemberger cavalry brigade, as we searched for the airman in Hulste.