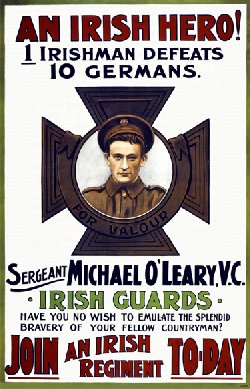 This officer has shown such conspicuous gallantry that I recommend his case be favourably considered, and that he be granted a bar to the Victoria Cross that he already holds.


At Zonnebeke, when he was with the Bearer Division of the 5th Field Ambulance, in a most exposed position, he went continually over the ground in between the English and German positions in search for wounded and though always fired at, and aften having to crawl on hands and knees, he was able to get away large numbers of wounded men who would otherwise have been left to the inclemency of the weather and continual shelling of the enemy. These operations often took many hours to accomplish. There can be no doubt by his devotion many lives have been saved that would otherwise undoubtedly have been last. His behaviour on three occasions when the dressing station was heavily shelled on the 5th November, 9th November and 12th November was such as to inspire confidence both with the wounded and the staff.


In such a case it is not possible to quote any one specific act performed because his gallant conduct was continual, and the fact that he repeatedly successfully accomplished his dangerous mission makes his case, in my opinion, all the more worthy of reward.


I also recommend Captain Loughman, RAMC, who accompanied Captain Leake should be awarded with a DSO.