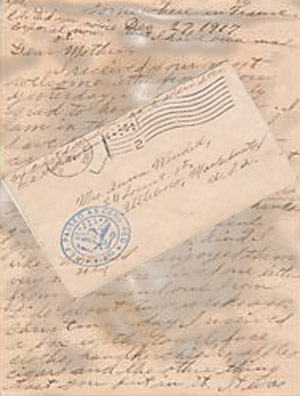 I received the box of cigars you sent me just after Thanksgiving. They were certainly great and just the kind I like best, and I enjoyed them very much. I received one letter from you and one from Dide about two weeks ago. Christmas day I received a box with towels, face cloths, handkerchiefs, apples, cigars and the other things that you put in it. It was certainly a dandy box and all the apples except one was as perfect as the day they were picked.

All the mail comes in bunches, but we are glad to get it when it comes. What do they say about the war over there? 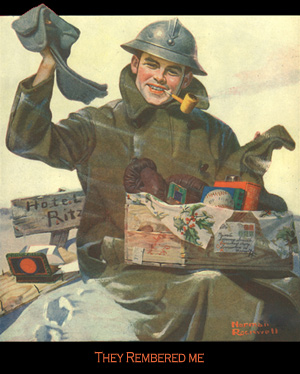 We had a wonderful Thanksgiving here, and a most wonderful Christmas. We had sports in the morning and a football game. We had a fine turkey dinner with all the fixings. In the afternoon we went over to the Y.M.C.A. Hut, which we had for our company exclusively from three to five thirty in the afternoon. We had songs, comedians, speeches, piano solos and a hypnotist who was very good. We spend the afternoon in laughter, and if a stranger had stopped in, who knew nothing about the war, he would never have known there was a war.

It is pretty cold here now, and everything is covered in snow. We are all O.K. though and don't mind it a bit. We all have nice ruddy complexions and are getting hardened to the job and all look healthier and stronger than ever.

I read in a French paper where a French fellow by the name of Leo Benoit, who is in the Lafayette Escadrille for aviators, fell with his plane, but within the French lines and broke both his legs. It said that he was from Attleboro.

P.S. Did you notice that I have been made Corporal now?